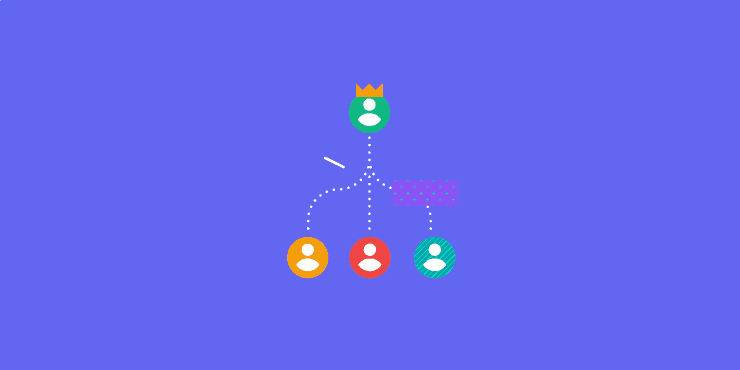 The 7 Types of Leadership Styles Explained – With Examples

At the head of every successful project is a great leader. But not all great leaders are the same.

There are many different ways to lead a team. And different leaders have different traits that make their specific brand of leadership work.

In this article we’re going to take a look at 7 different types of leadership styles, so you can discover which one is right for you and your business.

Transformational leadership is a leadership style that requires the leader to inspire employees and motivate them towards achieving their collective goal.

Transformational leaders often embody their vision and believe in it so strongly that they can empower others to do the same.

Transformational leadership puts a greater focus on the vision of the business, and therefore employees are usually more aligned with the company values.

This helps to build stronger relationships between teams and can result in higher employee retention and engagement – particularly among millennial employees.

According to a study by PwC, 56% of millennials would consider leaving an employer that didn’t have the values they expected – so transformational and visionary leaders are a great fit for this demographic.

However, this constant pushing towards an ambitious goal can result in employee burnout. Constant motivation is required to see teams through tough times, and even then, a transformational leader could unintentionally cause too much competitiveness among their team.

Think of the start ups that work 80 hour weeks in a bid to disrupt their industry – yes, it’s exciting. But in the long run it can also be incredibly tiring.

Example of a transformational leader

There are many examples of transformational leaders throughout history, because these are exactly the type of people to go down in history. They have bold visions and they make them a reality.

Think of Churchill’s “we shall fight on the beaches” speech. Churchill is a great example of a transformational leader that inspired an entire nation of people to work towards a common goal.

In today’s world, Elon Musk is another example of a transformational leader. His company SpaceX is the first private spaceflight company to send a crewed spacecraft to space. And he is famously quoted as saying, “Failure is not an option. If things are failing, you are not innovating.”

Richard Branson is also an excellent example of a transformational leader. His Virgin Group owns several companies across a range of industries, from broadband to international travel. Branson himself isn’t an expert in all of these industries, but his charismatic personality gives him the power to inspire others to get excited about these ideas and make them work.

This is basically a boss that has full control of their team and makes all of the decisions with little input from anyone else.

On the face of it, this leadership style can sound a little tyrannical, but there are some advantages of being an autocratic leader.

For example, if the leader is the most knowledgeable person on the team then this leadership style can ensure decisions are made faster.

Autocratic leaders are also great at making their expectations clear and directions easy to follow.

However, as expected, this leadership style can result in employees feeling unmotivated and disengaged, which can ultimately result in increased turnover.

Example of an autocratic leader

Martha Stewart has her autocratic leadership style to thank for her self-made empire. She has been described as a meticulous boss that’s very demanding of her employees.

And that’s because Stewart has a very clear vision to share with her staff and her customers. It’s this same attention-to-detail that’s boosted her to be a household name, with almost every home in America using her merchandise at one point or another.

Also known as democratic leadership, participative leadership allows everyone on the team to get involved and work together to make important decisions.

While everyone’s input is encouraged, it’s the leader who will have the final say in the decision-making process.

Participative leadership is a great way to increase employee engagement and satisfaction. If everyone is motivated to contribute and feels included, then they’re also likely to feel more aligned with the company.

However, we all know the saying about too many cooks. Disagreements between team members can result in the decision-making process being time-consuming and unproductive.

Example of a participative leader

Southwest Airlines has had many different leaders over the years, and all of them seemed to embody the participative leadership style.

It’s likely that this is the trait that has taken the business from a small Texas airline to a major US carrier.

Ex-CEO, James Parker referred to participative leadership in his book, Do the Right Thing:

“I’ve always tried to expect the best of people and to trust them – and I have almost never been disappointed…Part of trusting people is empowering them to make decisions.”

The current president of Southwest Airlines, Tom Nealon, also believes in participative leadership, as is evident in this interview:

Transactional leadership uses a model of rewards and punishments to motivate employees.

Clear goals are set at the start of a project, with everyone informed on the reward if those goals are met and the consequences if they are not.

This “give and take” leadership style can motivate employees and increase productivity and satisfaction, so long as the goals outlined are clear and achievable.

Another advantage of transactional leadership is that it’s easy to understand and implement. Employees know exactly what’s expected of them and they can benefit from rewards if they regularly meet their goals.

Disadvantages of this leadership style include a minimization of employee innovation and creativity, and a high employee turnover of those who are “punished” for not meeting their deadlines.

Example of a transactional leader

A classic example of a transactional leader is the ex-football manager, Sir Alex Ferguson. When he was managing Manchester United, he got a lot out of his team using this leadership style.

Players were rewarded financially if they played well consistently. However, those that were seen as underachieving felt the wrath of Ferguson’s notorious temper.

This is touched upon in his book, Leading, in which he states:

“I place discipline above all else and it might have cost us several titles. But if I had to repeat things I’d do it precisely the same because discipline has to come before anything else.”

Also known as “laissez-faire leadership”, delegative leadership is a hands-off approach that allows team members to use their own initiative to make decisions.

There are similarities to participative leadership here, in that employees are valued for their opinions and decisions are made somewhat collectively.

Delegative leadership allows competent employees to shine and be rewarded for their innovation. This can result in a positive atmosphere that’s incredibly fulfilling to employees and makes them feel valued.

The more people that are involved in making decisions, the longer the decision-making process is going to be.

Example of a delegative leader

The American investor, Warren Buffet has been the CEO of the holding company Berkshire Hathaway since 1970.

He’s noted as a delegative leader because of his method of empowering his employees to make their own decisions and solve their own problems.

He explains his leadership style in his own words, here:

Bureaucratic leadership puts the needs of the company first and relies on stringent rules being in place for all team members to follow.

This is common in long-established industries where rules have been laid out by predecessors.

This leadership style can be advantageous in industries where there’s little room for error. It’s easy to implement because the responsibilities of each employee are defined by their job role or title.

However, doing things just “as they’ve always been” can lead a team – and a company – to go stale and possibly fall behind.

Example of a bureaucratic leader

Bureaucratic leaders, because of the nature of this leadership style, are typically forged by the businesses that they work for.

An example of a business that does things as they’ve always done is McDonalds. Despite their leadership team changing over time, McDonalds has been run in the same way because their barometer for success is profit.

As long as the business is profitable, the shareholders are happy and the company is classed as successful – and ultimately, customers get the same experience every time.

This is why entrepreneurs that opt to buy a McDonalds franchise are expected to adhere to strict rules and regulations when running their branch.

Servant leadership places the value of the team ahead of the individual. As such, a servant leader is someone who can shed personal agendas and whose main goal is for their team (and the company) to thrive.

Servant leaders do everything they can to serve their team and ensure that everyone is happy and fulfilled.

Servant leaders – because of their selfless nature – see potential in their team and enjoy raising them to new heights.

This can create an amazing working atmosphere and increase job satisfaction.

However, because of this focus on serving the team, servant leaders can sometimes be undermined if they are seen as lacking authority.

Example of a servant leader

Leadership expert and author of Leaders Eat Last: Why Some Teams Pull Together and Others Don’t, Simon Sinek strongly believes in this leadership style.

He explains this in more detail here:

There are many ways to lead your team to success, and one of the most important things is ensuring that you have the correct tools at your disposal.

A project management tool can help you successfully manage your projects by keeping everything – communication, files, task lists – in one place, so that you have complete visibility of your team’s work.

To find out more, head to Project.co.