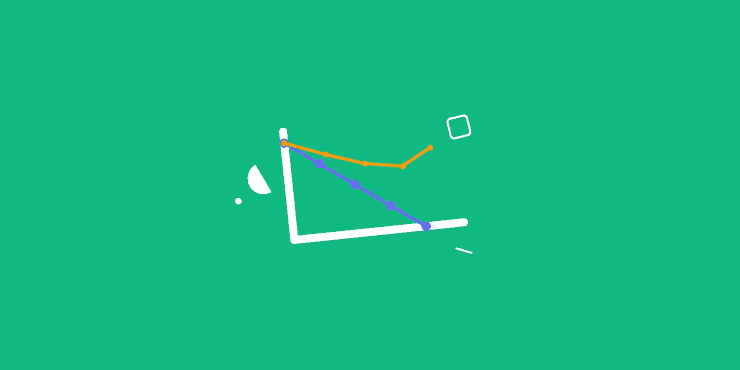 What is a Burndown Chart and How Do I Use It?

Socrates once said “Like sands of the hourglass, so are the days of our lives.”

And never has that felt *more literal* than when you’re up against a tough deadline, or have a big project in front of you!

Whether you’re working in sprints, or just trying to get your projects wrapped up – one of the key skills of project management is dividing ‘effort’ into ‘time’ to ensure stuff gets finished on schedule.

And not just doing this at the beginning of a project and then forgetting about it: but responding to your projects as their progress inevitably ebbs and flows throughout its life cycle.

Of course, you can’t measure what you can’t see – and that’s where burndown charts come in.

What is a burndown chart?

A burndown chart is an agile tool that visualises how much work is left to do, and how much time there is to do it.

They can help manage resource allocation – and, indeed, help you to actually forecast deadlines.

The ‘ideal time remaining’ burndown represents the perfect scenario where effort is distributed evenly across each day. It’s this line that’s often used to work out and forecast deadlines and is often a straight line.

But, as we all know – in the real world – that equal distribution isn’t how projects really work! This is why the ‘actual time remaining’ or ‘actual work’ line is often a bit more wobbly. Sometimes you’ll be ahead of schedule, sometimes you’ll slip behind, so the actual work line fluctuates along the way.

But being able to visualise this in this way will allow you to spot projects that are behind schedule, and move resources around to amp up production where required to ensure course is corrected.

The bullet points along the line are milestones and events as the project unfolds – these are often referred to as ‘story points’ in sprint burndown charts.

Why use burndown charts?

Using burndown charts gives you a series of key benefits:

That all sounds great. But burndown charts aren’t without their problems and limitations.

By their very nature, burndown charts need to be updated regularly – usually at least once a day – and this can create another bit of admin to keep updating, unless it’s synched with your PM tool in some way.

If the data isn’t up to date, the burndown chart becomes completely redundant as a yardstick for project progress.

They rely on good estimates and honest updates

Equally, we have a problem that’s inherent with any exercise in forecasting and reporting: is the data right?

How often have you worked on a project where, on paper, delivery within a certain timescale was more than achievable – but faced with the realities of other work, unexpected loss of resource or other circumstances beyond your control – you realise that it wasn’t quite as simple as you thought?

Burndown charts need honesty and accuracy throughout, or they just won’t work.

They lack nuance and detail

The simplicity of a burndown chart is both a strength and a weakness.

They’re great for getting a general overview of how many tasks are done and how many are outstanding – and that means they’ll work well where all tasks are roughly similar in scope and scale.

However, they don’t take into account the fact that Task ‘A’ and Task ‘B’, for example, might be wildly different in nature.

Clearly, these will all take different amounts of time and effort, require different skills – but within the parameters of a burndown chart, all you’ll be able to see is whether they’re done or not.

This makes them potentially an unreliable data source for planning resource allocation.

They don’t take into account team capacity vs other projects

Another limitation is that they’ll only give you a view of *one* particular project at a time.

If you operate in a business where your teams are routinely working on multiple projects at any given time, you can’t plan resource allocation at a ‘team’ level using a burndown chart alone – because you wouldn’t know what else they had on their desk at any given time.

What about burnup charts?

Some people talk about ‘burnup charts’ rather than burndown.

These are essentially the same thing but ‘inverted’ so the lines work ‘up’ towards the total number of tasks that need to be completed.

The difference here is purely notional – it’s the same thing but viewed from a different perspective.

Burnup charts encourage your people to ‘work up’ towards a number of completed tasks, rather than racing that downward, nosediving timeline in a burndown chart!

Combining a burndown chart with a project management tool like Project.co is a great way to keep your team on the same page, giving everyone clear visibility of work completed as a project progresses.

However, they’re limited in a number of important ways.

If all your tasks are roughly similar in scope and time required – and your team only works on one *big* project at a time – it can be a useful model to keep your team on target. They’re particularly well suited to use among agile teams within the context of agile project management – which is why you might often hear a burndown chart called a ‘sprint burndown chart.’

If you do decide to use burndown charts, make sure to display them somewhere prominent where everyone has access to it, e.g. on a wall or whiteboard in your physical office, or in the ‘Embeds’ section of Project.co.